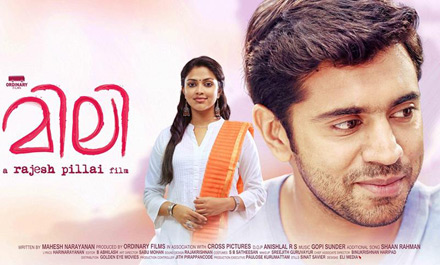 Mili is the story of a lonely kid Mili (Amala Paul), who grows up into an introvert girl. She is under-confident to the core. She struggles with the inability to mingle properly with others; thus making the people around her think that she is mentally unstable. But at heart, Mili is a normal girl who thinks like any other girl of her age.

“Mili is an introvert, but what makes her different from others is that, she considers her failures as a stepping stone to success,” the director had said, adding that there is a Mili in all of us. “She rises above all challenges and takes the reigns of her of life,” he adds. The film has Amala Paul playing the title role, and is paired opposite Nivin Pauly.

This story will definitely make the audience think that it is their own story, and that is the major point which makes Rajesh Pillai’s Mili different from the other movies. Even with a weak script and characterization, Mili manages to find a place in the hearts of the audience, with that element which makes them look back to their own childhoods.

The movie, which starts by making a character sketch of the title character Mili, portrays her as a girl with a highly-complicated heart. But, the rest of the incidents show that Mili has a very normal thought process; and she suddenly changes her behaviour with a small piece of advice given by her friend Naveen (Nivin Pauly).