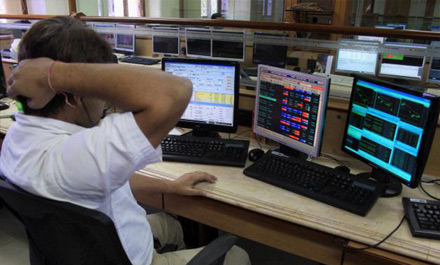 Profit booking continued for another day of trade on Friday. The Nifty closed below the 8250 level (important support level) weighed by oil and mining stocks. The slide in European markets after International Energy Agency cut 2015 oil demand growth forecast also dampened sentiment on the street.

It was just a profit booking triggered due to global growth worries post fall in crude oil prices, but there is no fundamental weakness as such, feel experts who advise sticking to quality stocks.

Meanwhile, Raamdeo Agarwal of Motilal Oswal said the Indian markets have risen 100 times in the last 30 years and there is nothing stopping India from seeing exponential growth in the next 25 years. He advises holding onto quality names as quality and growth together will lead to exponential gains.

For the week, the Sensex crashed 4 percent and Nifty fell 3.7 percent while the CNX Midcap and BSE Small Cap indices were down over 3.5 percent. BSE Realty, Capital Goods, Oil & Gas, Metals, Power, and IT slipped 4-7 percent.

Globally, Asian markets mostly closed higher on positive US cues overnight and hopes of stimulus post soft economic data despite fall in crude oil prices. European markets like CAC, DAX and FTSE were down 1 percent each led by fall in oil and metals stocks.

Brent crude hit a five-and-half-year low of USD 63 a barrel on a supply glut, down 1 percent today and down 45 percent compared to USD 115 a barrel in June.

On the home turf, Lok Sabha has passed Coal Mines Bill today. Meanwhile, Finance Minister Arun Jaitley said the government will introduce Goods & Services Tax bill in next session of parliament. “We will try to pass Insurance Amendment Bill next week. In fact, we are working overtime to push reforms in Insurance, Coal Bill,” he adds.

RBI Governor Raghuram Rajan said, “Make for India is as important as Make in India.” He advises against an export-led policy for India. Speaking on inflation, the RBI governor said the path of disinflation cannot be very steep for India.

BSE Oil & Gas fell the most among sectoral indices, down 2.6 percent followed by Capital Goods with a 2 percent fall. Metal and Power were down 1.4 percent each.

However, Infosys, Maruti Suzuki and Sun Pharma bucked the trend, up 0.8-1.3 percent. Bharti Airtel gained 1.2 percent as the defence ministry agreed to release 5 MHZ of spectrum in the 2100 MHZ which is likely to be auctioned next year.