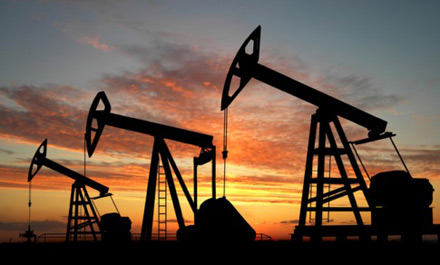 Brent oil extended losses into a fourth session on Tuesday, with prices hovering close to a more than five-year low, near $57 per barrel, as persistent worries about a global supply glut offset concerns about output disruptions in Libya.

However, forecasts for a 900,000-barrel drawdown last week in oil stocks in top consumer the United States, following a rise to highest recorded December level in the week ending Dec. 19, checked losses in crude prices.

Brent for February delivery is trading at less than $57 a barrel, the lowest level since May 2009.

“There’s no sign of any reduction of output by OPEC,” said Ken Hasegawa, commodity sales manager at Tokyo’s Newedge Japan.

Traders are now eyeing the weekly US inventory data.

The industry group the American Petroleum Institute is scheduled to release its report later in the day, while the US Department of Energy’s Energy Information Administration will release its data Wednesday.

“A potential surprise draw in US oil stocks would give a short-term fillip to the upside,” said Michael McCarthy, chief market strategist at Sydney’s CMC Markets.

Supply disruptions in Libya, which is producing 128,000 barrels per day from fields linked to the eastern port of Hariga after fighting halted operations at the key export ports Es Sider and Ras Lanuf, also supported oil prices.

“Libya is not a major producer, but the disruption could be a trigger for a mini-rally,” McCarthy said.

Oil prices this year have been hammered by rising global supply and more recently OPEC’s reluctance to cut output. Brent is heading for its biggest annual drop, while US crude is set to post its biggest decline since 2008.