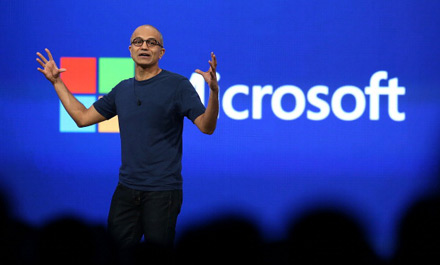 “It was a courtesy visit. Microsoft is the company that is a multinational but is operating in India for India and Indian businesses…

“In every meeting ofcourse both ‘Digital India’ and ‘Make in India’ are top of mind and for us, top of mind in terms of our contribution to India,” Nadella said after his meeting with Jaitley.

This was his second visit to India since taking over as global CEO of USD 86-billion technology giant Microsoft.

Sources in the Finance Ministry said Nadella had informed Jaitley that Microsoft was keen on “investing more” in India.

“The Minister (Prasad) shared with Mr Nadella the initiative of Digital India taken by this government headed by the Prime Minister. He told the Microsoft CEO that Digital India is designed to bridge the gap between haves and have-nots,” Communication and IT Ministry said in a statement.

Prasad also shared with him India’s potential in the field of e-Commerce and how connectivity can play a role in harnessing this potential, he added.

“The Minister further urged Microsoft to work towards digital literacy in India… The Minister also informed about the incentives for promoting electronic manufacturing in India as a part of Make in India,” it said.

Microsoft is keen on collaborating with the government in providing last mile Internet connectivity, especially through the Wi-Fi technology, the statement added.

Nadella also shared his ideas on modernisation of government with Prasad stating that Microsoft can help in building secure government controlled digital infrastructure.

Other issues like data security and domestic electronic manufacturing were also discussed.