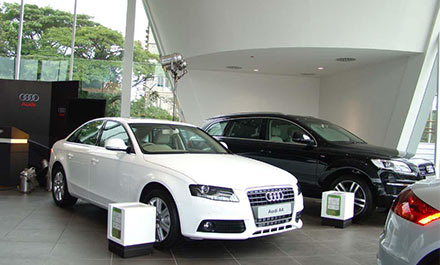 Passengers stepping out of the Kochi international airport are usually greeted with large hoardings promoting jewellery and sari brands. They tell the story of the preferences of consumers in Kerala. But drive a little over 10 km south towards the capital Thiruvananthapuram, you would see showrooms of a number of automobile companies such as Toyota, Maruti SuzukiBSE 1.74 % and BMW.

There are actually 22 car brands and one motorbike brand, Harley Davidson, selling their wares on either side of the highway.

Kerala is not a car country but this 20-km stretch on the highway — arguably with the largest concentration of automobile showrooms in India — seems to be trying to defy the notion that the state is just about gold and saris. Some of these showrooms are the largest in Asia.

Cars apart, there are also shops that sell auto parts and tyres. Not to forget service centres — all of which make the section of highway connecting Kalamassery to Aroor a buzzing automobile hub.

Take the showroom of Toyota at Kalamassery. The 11-storey building, spread over 4 lakh sq ft, is billed as the largest car showroom in Asia. Each floor exclusively caters to divisions like body and paint, repairs, display and so on. Test drives on the highway can be a bother, so there’s a test drive track on the third floor itself. Customers can also customise cars here.

“Kerala is now a strong market for luxury vehicles and we have to give the right ambience to boost the confidence of the customer to select a particular car,” says Eldo Benjamin, vice-president of Nippon Toyota. The boom in luxury car sales in Kerala started in 2011-12, according to industry observers. Today the state is estimated to account for 13 per cent of the national sales of premium cars. An upscale deluxe car is no longer the preserve of big planters and NRIs. Doctors, chartered accountants, architects and young entrepreneurs are all lapping up marquee brands.

“In 2008, when we came into this market the total demand in the luxury segment was just about 120 cars a year. Our entry has opened up the market. Today, the market is around 1,200-1,300 cars per year,” says K Jayakumar, vice-president, Platino Classic, BMW dealer for Kochi and Kozhikode.

BMW’s growth explains how the automobile market in Kerala has evolved. In 2008, the company sold 148 cars. In four years, the number shot up to 550 cars. The market share of BMW in Kerala in 2012 was 55 per cent, the highest for the brand in the country.

Dealers of other global brands also feel that Kochi is a market with huge potential. Having a variety of showrooms at one place is convenient for consumers, as good as visiting a mall. So people from far-off places too come and make enquiries. “We get a lot of ‘customer walk-ins’ when we are in the same street,” says Jayakumar.

Nevin Mathew, head of marketing at Muthoot Motors, dealers of Jaguar Land Rover, said the Kochi market leads the country in terms of sales of the most premium vehicles. In 2013-14, Muthoot Motors sold a record nine Range Rover Vogues — its most premium car — with an average price tag of Rs 2.5 crore. Customers waited nearly five months after bookings for the cars to arrive. Mathew sees that as a sign of the maturity of the market.

Mitesh K Patel, director of KP Cars, the dealers for Audi, says 15 per cent of the total sales comprise top-end models. Its range of cars in the showrooms starts from Rs 24 lakh going up to Rs 1.4 crore. “All our models are moving. The Q5 and Q7 models are much in demand,” he says.