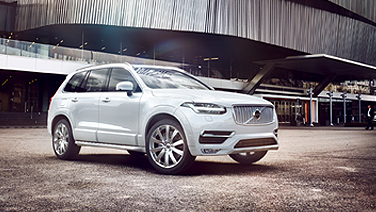 With All-Wheel Drive, seating for seven and an anti-skid system the Volvo XC90 is one of the safest SUVs.

Volvo Auto India has confirmed that the bookings for the new Volvo XC90 (2015) will commence in April and official launch will be in the month of September this year. The 2015 Volvo XC90 will compete against Audi Q7, BMW X5 and Mercedes-Benz GL-Class.

There’s no need to leave anyone behind. With seven seats the XC90 has space for all to ride in style and comfort. R-Design adds even more attitude to the XC90. With sport chassis, stainless steel scuff plates, sport seats and double exhaust pipes, it is a design that will turn heads.

The latest XC90 gets longer, taller and lower dimensions than the present model. Incidentally, it will be the first all-new car to emerge under the brand’s current Chinese ownership. At the front, it gets a prominent chrome-trimmed grille, a first from Volvo. An elongated and chiseled bonnet cuts back into the SUV’s shoulder line, all the way to the tapered rear lights. In turn, this design gives the vehicle a broad stance.