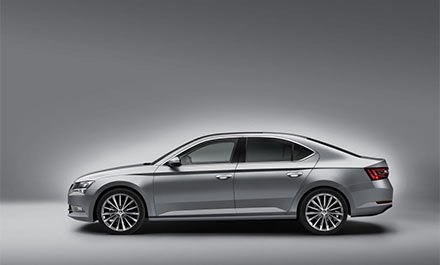 Skoda unveils the all-new Superb; to be launched in India by mid of 2016

Skoda has unveiled a replacement for its flagship Superb ahead of the 2015 Geneva motor show.

The full-sized sedan is set to tackle new rivals such as the Hyundai Genesis with a roomier cabin and new technology including autonomous emergency braking, in-car Wi-Fi and a new suite of apps for passengers.

The new car is 28mm longer, 47mm wider and 6mm higher than the already roomy previous model, while a wheelbase 80mm longer than its predecessor results in legroom Skoda claims is “twice as much as the nearest competitor model”.

A 625-litre boot is among the largest in its class, and owners can open its powered tailgate by waving a foot under the rear bumper.

Skoda claims that the new car is 75 kilograms lighter than its predecessor, with the most efficient GreenLine model using just 3.7L/100km.

The Superb’s choice of four-cylinder petrol engines offer between 92kW and 206kW, while diesel motors engines have outputs from 88kW to 140kW. Australian models are likely to be sold in dual-clutch automatic form only, with power going to the front wheels in some models and all four wheels in others.

The previous model’s flagship 3.6-litre V6 engine has been replaced by a 206kW, 350Nm 2.0-litre petrol motor that produces 15kW more than the outgoing unit.

Riding on the same underpinnings as the new Volkswagen Passat, the Superb is the first Skoda to offer Volkswagen’s three-mode Dynamic Chassis Control system that is standard on machines such as the Golf GTI and Scirocco R

Following in the footsteps of luxury machines such as the Rolls-Royce Phantom, the Superb has umbrellas inside the front doors that offer protection for passengers during inclement weather.

A new infotainment system  includes family-friendly smartphone apps that allow children to virtually drive alongside parents during journeys, while other features include a digital sound synthesizer that can substitute the model’s engine sound for that of a racing car or aircraft.

Final prices and specifications will be confirmed closer to the car’s Australian launch in 2016.

Price: To be confirmed.