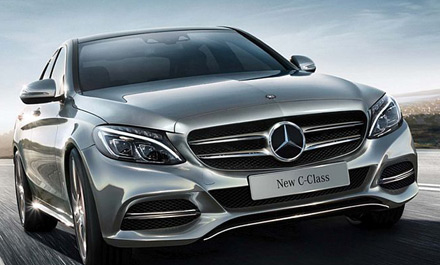 The company has launched the new C-Class with petrol engine and plans to launch the diesel variant of the car next year.

“The new C-Class joins the latest generations of the E and S-Class to create the youngest and most wide ranging saloon line up of any automaker globally,” Mercedes-Benz Managing Director & CEO Eberhard Kern told reporters.

Terming the model as an “important product” for the company, Kern said the company’s strategy for India is on the right track and paying results.

With this launch the company has achieved its target of launching ten cars in the Indian market in 2014.

Earlier this year Mercedes Benz had said it planned to launch about 10 new products in India in 2014 as part of plans to continue with the double digit growth that it witnessed last year.

It has also launched GLA Class and a petrol variant of GLA 45 AMG, to tap the fast growing SUV segment in the country.

The company had sold a total of 9,003 cars last year in India and is looking at double digit growth this year.

It has expanded production at its Chakan plant to 20,000 units annually to meet growing demand in the country.

The luxury car maker is also looking to locally assemble the CLA sedan that would be launched next year.