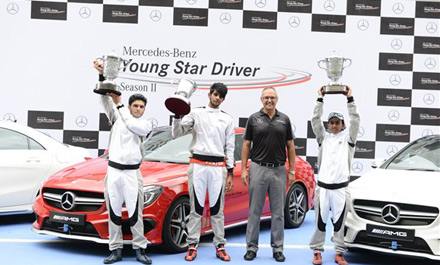 The top six finalists among 5,970 young aspirants for the Season II of Young Star Driver programme displayed an unmatched array of passion for driving, determination to win and a precise judgement and maturity to handle a high performance AMG car, which is often associated with professional racers.

The finals of the Young Star Driver Programme Season II was flagged off by Eberhard Kern, MD & CEO, Mercedes-Benz India, and Vicky Chandhok, one of India’s most renowned racing personalities.

The Young Star Driver Programme Season II witnessed a near 100% surge in registrations from Season I and received 5,970 applications from young motorsport enthusiasts from across the country. This truly illustrates the grit and racing acumen of youngsters in India and the increasing popularity and eagerness about motorsports in India.

Kern said, “Mercedes-AMG was born on the racetrack and we are proud of the brand’s global association with different forms of motorsports and our immaculate track record which spells excellence. The current performance of the MERCEDES AMG PETRONAS F1 team, winning a podium in each of the eleven races is a living example of the highest levels of accomplishment and excellence in the competitive world of motorsports.”

“Inspired by such achievements, it was Mercedes-Benz’s vision to identify and nurture young motorsports talent in India, which resulted in the creation of the Young Star Driver Programme in 2013. We are overwhelmed by the tremendous response to Young Star Driver Season II, which further reaffirms our belief in the genuine and high caliber racing talents in India and reassures our heading in the right direction. Mercedes-Benz is proud to pioneer such unique initiatives which not only bear a direct connect with the youngsters of the country, but also leave them with an indelible impression of brand Mercedes-Benz,” he said.