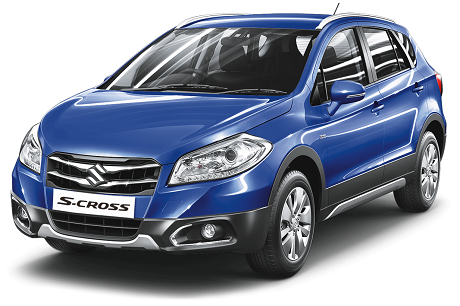 Maruti Suzuki, the country’s largest carmaker, will launch the much-anticipated S-Cross Premium Crossover on August 5, 2015, revealed MSI at the inauguration of its premium dealership range Nexa. Priced somewhere around INR 8-INR 12 lacs. The Premium Crossover–Driven by passion. Designed to thrill. Engineered to last.

The sloping roof highlights the car’s sporty look and its superior aerodynamics. Elegant contours across the body smoothen the airflow across the car. An emotive character line sculpted along the car adds definition and personality to its form.

With the unparalleled new functions in S-Cross, entertainment and latest innovations are at your fingertips.

The overhead console consists of map lamps and a holder for sunglasses. It adds to the easy accessibility for the driver and co-driver.

Front airbags for the driver and passenger mitigate the collision forces inflicted on the head in the event of a frontal impact.

The S-Cross combines the best in fuel efficiency and raw power with the DDiS 320 & DDiS 200 engine. Ensuring that you’ll never hold back when you’re driving behind the wheel.

All new 1.6l DDiS 320 diesel engine with a displacement of 1.6l is the biggest by Maruti Suzuki.

This engine gives you a massive torque of 320Nm @ 1750rpm and has a Variable Geometry Turbocharger (VGT). The VGT gives optimal forced induction by controlling the flow of exhaust gases in accordance with the engine speed, thereby helping to release high torque, low fuel consumption, and low emissions of particulate matter. The diesel engine is complemented by various sound-insulating materials which suppress the vibration and noise that characterize diesel engines.

The combination of common rail fuel injection with an inter-cooled turbocharger delivers dynamic torque for excellent acceleration and all-round performance, together with best-in-class fuel-efficiency.