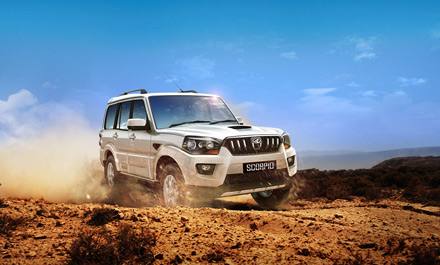 The Scorpio has been one of Mahindra’s best sellers in India, combining good design, first-in-segment features and value-for-money Electronics proposition. The only things that may have put off buyers of the old model, like high-speed stability and the interior design, have been addressed by the new Scorpio. Mahindra engineers have focused more on improving the ride and handling of the SUV and improving the interiors while also giving the SUV a new look on the outside. Let’s have a look at what the new Scorpio offers.

The overall silhouette of the SUV has remained the same while new tid-bits have been added to refresh the design.

Let’s break this down.

Grille: Body coloured unit on the older model replaced by matte-black unit, at least on the lower-end variants. The grille becomes more edgy, upright, loses the chrome “tooth’ found previously, and gets a slim chrome bar running along the top-edge. It retains the similar vertical 8-slat design found on the previous-gen SUV.

Headlamp cluster: Overall design is more edgy, comparisons have been made to the headlights of the Dodge Charger. Get’s dual-barrel headlamps – top-end variant gets projector lamps-, indicators move to the inside. Biggest feature will the be addition of LED day-time running lamps.

Front Bumper: The bottom of the bumper has been made all-black to make the front look more compact, new faux air-intakes are more prominent than before and feature the same fog-lamps as before on higher variants. The Bumper is certainly more easier on the eyes than the one on the previous model. The bumper flows smoothly onto the side and meets the front fenders.

Bonnet: Does not gently slope forward like the previous generation model. The intake is now recessed, rather than bulging-out as was the case previously.

Side view: Remains mostly the same. New fenders are much more pronounced. New side indicators sit just above the front fenders and get a black surround. New alloy wheel design on S8 and S10 variants.

Rear grab-handles: The tail-gate is flanked by two grab-handles, which may help ingress the SUV. These replace the reflectors introduced in the previous facelift.


Rear spoiler: Same design as before, but loses the integrated stop-lamp. Stop lamp has been moved onto the top of the rear-windscreen.

Tail-lamp cluster: The tail-lamp cluster has not been changed in terms of overall shape, but the elements have changed. The circular housing in the previous model has been replaced by semi-circular units, the stop lamps are now LEDs which incorporate the indicator (on top) and reverse lamp (the blue one). The whole unit is encompassed in chrome, which is again surrounded by matte-black pastic, this may look tacky to some.

Tailgate: The rear windscreen gets smaller, the black surround are now thicker, which may hamper rear-visibility. Rear wiper seems to be smaller. The number plate holder has been moved up slightly and gets a matte-chrome surround which is placed in a matte black section which stretches across the width of the SUV.

Rear bumper: Looks the same as before.

Dashboard: Different but still similar somehow. The centre console is still flat. New horizontal rectangular A/C vents all around. The recess above the glovebox is gone, so has the grab-handle above it. Dual-tone colour remains, but now you get three different sections with the centre section getting the beige plastics while the top and bottom section get black.

Instrument cluster: Is now angular, not round-ish like the previous model. Dual-pod design with analogue displays for vehicle speed and engine speed. Gets new MID screen.

Centre console: Gets new 7-inch touchscreen display, at least on the S10 variant. Gets new climate control system, with circular dials for controlling temperature and blower speed. Hazard warning lamp switch moves to the bottom from the top of the dash.

Lower centre console: Is dominated by a new gear-lever, which looks better than before. A 12-V socket is placed near it on the left. Cubby holes and bottle holders have been moved back. The power-window buttons have been moved to the door-pads, earlier they were placed beside the hand-brake lever.

Variant wise feature break-up, according to preliminary data is as follows:

The Scorpio facelift features a new body-on-frame chassis, which is much more stiffer and lighter thanks to the use of hydroforming. The new chassis makes the Scorpio less jittery at high speeds and makes it a much better handler. Mahindra claims that the handling problems suffered by the previous generations of the Scorpio due to their high-centre of gravity has been sorted.

The 2.2-litre mHawk turbo-diesel engine and the 2.5-litre m2Dicr engine has been carried over from the previous-gen Scorpio, the new Scorpio gets a better manual transmission though. This is expected to make the Scorpio much more pleasant to drive. The mHawk engine is expected to produce 138 BHP of maximum power in the new Scorpio as compared to 120 BHP in the previous model. An automatic transmission equipped variant may be launched later.