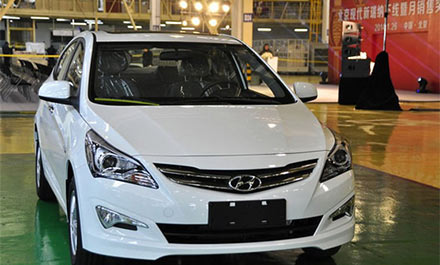 New Hyundai Verna Facelift Launching on February 18, 2015, reveals Hyundai India. The Verna has always been among the top-selling cars for the South Korean carmaker in India, but it lost its position to the new-gen City. And post the Maruti Ciaz launch, its positioned weakened further, so with the updated Verna, Hyundai is now aiming to regain its lost ground in the segment.

Already on sale in Russia as ‘Solaris’, the India-bound model is likely to take its design inspiration from the former. The new model will feature Hyundai’s Fluidic 2.0 design philosophy, which will make it look similar to the new-gen Sonata.

Hyundai Fluidic Verna is a midsize sedan from the Korean manufacturer, which has been successful throughout the globe. While the Hyundai gave it a much needed Fluidic look in 2011, not much has been changed ever since. And now after 4 years of its launch, Hyundai has decided to give a facelift to this popular sedan.

Hyundai has decided to launch the facelifted Verna on coming 16th February 2015 and it will be based on the facelifted Solaris. The new Verna will get an all-new front, which will be sharper and longer than the current car. The new long headlights will consist the fog lamps, while there will be L-Shaped DRLs on the bumper. The rear quarter will be almost similar to the current generation car. On the inside, the major change can be an improved power steering. The current generation Verna faced a lot of criticism for the nimble and over-light steering wheel. Material quality and features list will be updated too.

Hyundai showcased the new 2015 Hyundai Verna Facelift (internationally called Solaris) at the 2014 Moscow International Automobile Salon Motor Show. Called the Solaris in Russia and the Accent in some other parts of the world, the Hyundai Verna sedan has undergone an appreciable facelift at the front fascia.

Hyundai’s facelifted Verna is expected to get pricier by Rs 20000-50000 and will compete against the giants of Honda City, Maruti Suzuki Ciaz, Skoda Rapid, and the Volkswagen Vento.

Bookings for the new model have commenced and the upcoming car can be booked for INR 20,000 at the nearest Hyundai India dealership.