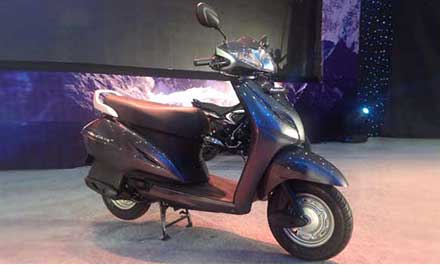 Honda Motorcycle & Scooter India has just launched a refreshed version of its popular scooter – the Activa 3G (or the third generation) – priced at Rs. 48,852 (ex-showroom, Delhi). The scooter gets new styling seen in the new side panels, a rear tail-light and new three-dimensional Honda emblems. The Activa 3G is equipped with the same 109.2cc engine that develops 8bhp at 7,500rpm and 0.9kgm of torque at 5,500rpm. The Activa 3G gets the front linked suspension and a rear monoshock carried over from the previous Activa. Honda Eco Technology (HET) also makes its way here, along with Honda’s patent combination brake system (CBS) and useful tubeless tyres. Honda’s new Activa 3G is available in blue, red, grey, black and white paint schemes.

Honda has also refreshed its 125cc CB Shine aesthetically, for the commuter segment. The CB Shine gets new graphics, side panels, a visor, tank and tail-light. Honda has also given the CB Shine its HET technology, to make it more fuel efficient. To make it a safer bike, Honda has provided the CB Shine with CBS too. It is now available in four new colours – black, grey, brown and red.

Apart from these two, Honda has also refreshed its Dream Yuga and Dream Neo models for 2015. The Dream Yuga will get new graphics and paint schemes – black, grey and red. The Dream Neo gets new graphics too, and now, will also be sold with a new lockable side cowl. Dual-tone, black with violet and black with red colour schemes, will now be available. Both the refreshed Dream series motorcycles will be available by the end of February 2015.

The Honda Dio also gets refreshed graphics and will be available by the end of March 2015 in blue, red, green and black paint schemes.

Keita Muramatsu, President and CEO, Honda India said, “With India’s contribution reaching 25 percent of global Honda motorcycle sales this year; India is and will remain Honda’s priority market globally. However, I consider 50 lakh units to be the turning point for Honda in India.

In FY 2015-16, Honda is taking the next leap of business expansion. We will be bigger with new manufacturing capabilities and an aggressively growing network in the hinterlands, better at customer satisfaction and bolder with our introduction of 15 new models.”