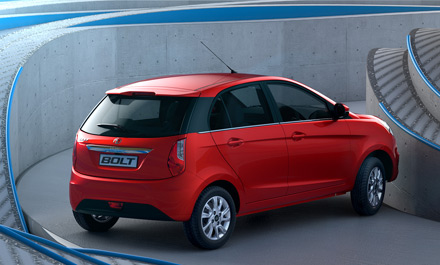 Bolt to give boost to Tata Motors’ petrol gameplan

Tata Motors has been on an image makeover drive with the launch of Zest. The company’s latest car, Bolt, takes it further in that direction.

The Zest was designed to be one step ahead of competition in all aspects including design, performance and finish. Though critics thought the company was being overambitious in aiming at a quick image makeover, the Zest silenced them all. Within a month of its launch, the Zest outsold even Honda’s Amaze.

The Bolt is expected to earn the company a pivotal position in the hatchback segment. About 60% of sales of the Zest came from its petrol version and the sales numbers helped correct the notion that Tata was primarily a diesel carmaker. The demand for petrol Zest has been so high that now there is a waiting period after booking.
What really puts the Zest a step ahead of competition is its Revotron 1.2- litre turbo-charged petrol engine. This kind of advanced technology is usually seen only in sports cars or other high-end cars. With Zest, Tatas have achieved the remarkable feat of bringing this technology into an affordable family sedan.

The engine has multi drive modes. There is a city mode for effortless puttering in the traffic and a sports mode for those who want to feel the rush of adrenaline. The economy mode is for the cost-conscious drivers. No other car in this segment has these options. The interiors are also on a par with luxury cars and the eight-speaker touch-screen Harman Kardon music system is of international standard.

All these ingredients have been carried over to the Bolt with some improvements. In the process, the company has created a car that offers ultra-modern technology and facilities like none other in its segment.

Clearly, Tatas are eying the super hatchback segment with the launch of Bolt. The car was designed by experts based in Coventry in Britain, Turin in Italy and Pune in India. The idea was to make a product that has new elements from head to toe.

The Bolt comes with a smoked projector headlamp and a beautiful grill. The bonnet is well contoured and gives the car a muscular look from its sides. With its receding roofline, black C pillar of the kind seen in Hyundai’s i-20 and an elegant rear, the Bolt looks similar to a classic sports car.

The interiors, dashboard and the steering are different in colour from the ones seen in Zest. The Bolt’s the interior is in an all-black theme unlike the Zest’s beige-black tone. The quality of plastics used in the interiors is high and poses competition to even foreign competitors. A chrome-wood finish adds to the beauty of its cabin. DVDs can be played in the stereo system and other facilities include a mobile phone-based ‘mapmyindia’ navigation system, SMS notifications and touch screen controls. The seats are of good quality and are comfortable.

The Revtron engine is brilliant and it gives a driving experience that is better than any other car in the segment. This mill churns out 90PS and 140 NMs of torque. Power kicks in at around 1500 RPMs and climbs smoothly with the revs, thereby offering awesome drivability. In all the three modes, sports, economy and city, the car does not compromise even a bit on the drivability front.

The electronic speed sensitive steering system automatically regulates the steering feel with the speed of the car. First generation ABS prevents locking of the wheels under hard braking while the corner stability control mechanism gives confidence while aggressively attacking corners.

In driving, it is not all about how fast you can go. It is also about how soon you can stop. The Bolt does both equally well.