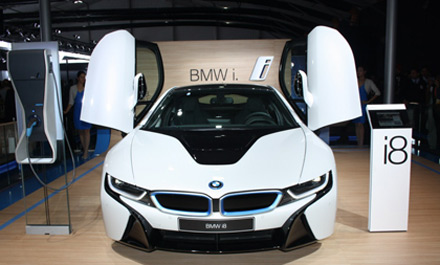 The car, which has been testing the patience of Indian auto lovers since its first appearance at Delhi Auto Expo, 2014 is geared up to hit the domestic market on 18 February.

The car will be brought to India as completely built up unit (CBU) and expected to have a price tag of about ₹2 crore .

Under the hood, BMW i8, the hybrid model is powered by a 3-cylinder, 1.5-litre, twin turbocharging petrol engine, in combination with an electric motor. The petrol engine generates a power of 231bhp, a peak torque of 320Nm and is mated to a 6-speed automatic gearbox transmission.

The electric motor of the i8 is tuned to generate 131 PS power and 250 Nm torque, taking the total output to 362PS and 570Nm. The car is capable of attaining 0 to 100kmph speed in 4.5 seconds with a top speed of 250kmph; along with a fuel efficiency of 40kmpl.The car weighs just 1,490 kg despite the presence of a large battery pack.