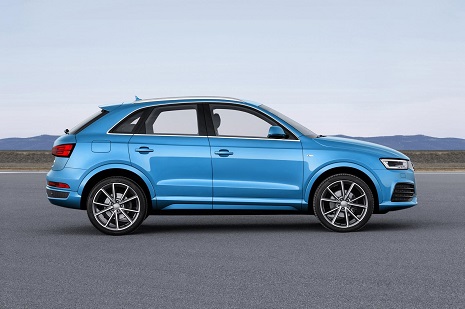 Audi India that recently rolled out the RS5 and RS7 in India, will now launch the 2015 Q3 facelift on June 18, 2015. Since it’s just a mid-life facelift, the updated model receives minor cosmetic changes along with a slightly tuned engine. As far as the cosmetic changes are concerned, the updated Q3 will get new LED head-lamps and a hexagonal grille. Though the engine remains the same, 2.0-litre TDI, it has been tuned to churns out about 4bhp more than the old version.

Starting on the outside, a shiny new border for the grille, different bumpers and some new wheel designs. Judging by the pictures Audi has issued, that includes some pretty large diameter options.

The headlights have been altered too, with xenon units and LED daytime running lights standard on entry-level SE models and all-LED lamps fitted to top S line and S line Plus trims. As part of the LED set-up there’s Audi’s latest indicator design, where the turn signals swipe across the lamp rather than winking on and off.

All models in the 2015 Q3 range now have a full body-colour paint finish, making the Q3 look less like an off-roader and more like a giant-wheeled A3.

All Q3 engines now meet the tougher Euro 6 emissions regs, and the range as a whole has a bit more power and use a bit less fuel.

There’s one new powerplant available: the clever cylinder-on-demand 148bhp 1.4-litre TFSI petrol unit from certain A1 and A3 models. Under low loads it’s able to shut down two of its four cylinders to save fuel, bringing the other two in smoothly when you put your foot down.

In the Q3 it’s front-wheel drive only, with a choice of manual or dual-clutch S-tronic auto. With the manual ’box Audi quotes combined cycle fuel consumption of 50.4mpg.

Elsewhere in the range, the top all-wheel-drive 2.0-litre TFSI petrol gets a power boost from 168bhp to 178bhp.

How much does the new Audi Q3 range cost?