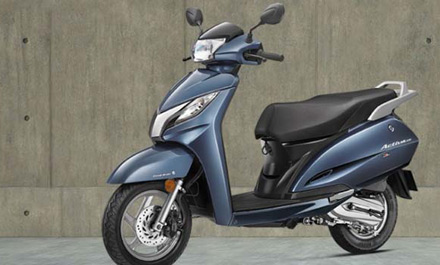 Activa, Splendor in race to the top

It was an unusually detailed press release from Honda Motorcycle & Scooter India issued two days before 2014 drew to an end. While the Japanese automaker dwelt on a series of achievements, which included 25 per cent growth in sales (against the industry’s 12 per cent), there were some numbers that could not be ignored. For instance, eight new customers bought a Honda two-wheeler every minute while ten products/refreshed models will debut this calendar.

The company is the market leader in scooters with 55 per cent share and also leads in the 125cc motorcycle space (thanks to the Shine) with 43 per cent. According to industry sources, Honda is making clear its intent in India which is largely about grabbing the top mantle from former ally, Hero MotoCorp. With its Gujarat plant still two years away, there is no way it will catch up in the numbers game at least till mid-2017.

However, it will be interesting to see if its Activa-led scooter manages to wrest the numero uno crown permanently from Hero’s Splendor, which it has overtaken a couple of months. While Honda’s scooter averages 2.2 lakh units each month, the Splendor (which includes the Super Splendor) is ahead by over 50,000 units. This gap could be bridged once the Gujarat plant comes on stream and rolls out 100,000 scooters each month. Will the Splendor still be going as strongly then?

Over the last 15 years, rivals have tried their best to take on Hero’s lucky mascot but just have not been able to sustain the challenge. In 2002, TVS Motor had a dream run with the Victor which gave Hero more than a run for its money in the commuter space. However, this dream run lasted briefly and it was only a matter of time before the Splendor was back on top.

Bajaj Auto, likewise, repositioned the Discover as its sole commuter brand in 2009. The renewed brand strategy worked like a charm and it looked as if the Splendor was finally feeling the heat. Yet, this was a short-lived phase and the Discover, while attempting to be the rival model with a difference, could not upset the Splendor applecart.

This also explains why Hero continues to surge ahead of Honda even after the two parted ways in end-2010. Observers believe it was ownership of the Splendor brand which made all the difference. To the customer, the stronger corporate brand of Honda was still not formidable enough to take on this champion motorcycle. To its credit, Hero continues to build on its retail strength and access every nook and corner of the country.

Honda still did its bit with the Dream Series in motorcycles clearly targeted at the Splendor base. The CD 110 was the next step in this strategy but industry observers do not think it will pose a threat to Hero’s supremacy. For the moment, it is only the Activa that looks the most likely candidate.

Going forward, it will be interesting to see if the market tilts even more rapidly to scooters. The commuter space will then see a dramatic shift similar to what happened 15 years ago when the traditional geared scooter was swamped by the (then) Hero Honda motorcycle onslaught. This time around, the roles will reverse as scooters take charge all over again.

Not everyone is convinced that motorcycles will implode as rapidly as what was seen in geared scooters. After all, they still continue to sell nearly three times as many though their share has been falling at the expense of scooters. By the time Honda’s plant is commissioned in 2017, it will be rolling out nearly 3.3 lakh scooters each month which will only bridge the gap with motorcycles even further. There are some within industry circles who believe that the ratio will be 1:1 over the next couple of years.

Will this eventually result in the Splendor gradually losing its pre-eminent status? It is a difficult question to answer especially when Hero is not taking its position for granted either. It also has successful brands like the Passion, Glamour and Pleasure and it remains to be seen if this is enough to stave off the threat from Honda.