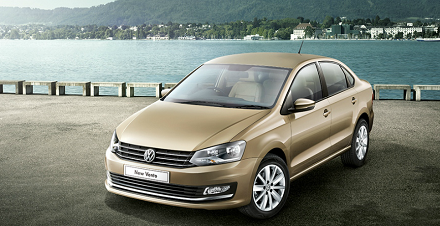 Set to launch on June 23, 2015, the 2015 Volkswagen Vento facelift has gone received several cosmetic changes and new features. Though the most significant update has come in the form of the improved fuel efficiency. The company claims to have tweaked all of its engines to return up to 7.5 per cent more mileage than before. The updated Vento gets a new front fascia with a revised hood, a new triple slat chrome-grille, new fog lamps and new bumper with a chrome strip. The rear, too, looks slightly refreshed with new tail-lamps, bumper and exhaust pipe.

The 2015 Volkswagen Vento is also expected to be introduced with a couple of new paint options. The interior will feel more premium and upmarket than the current model on sale in Indian markets.