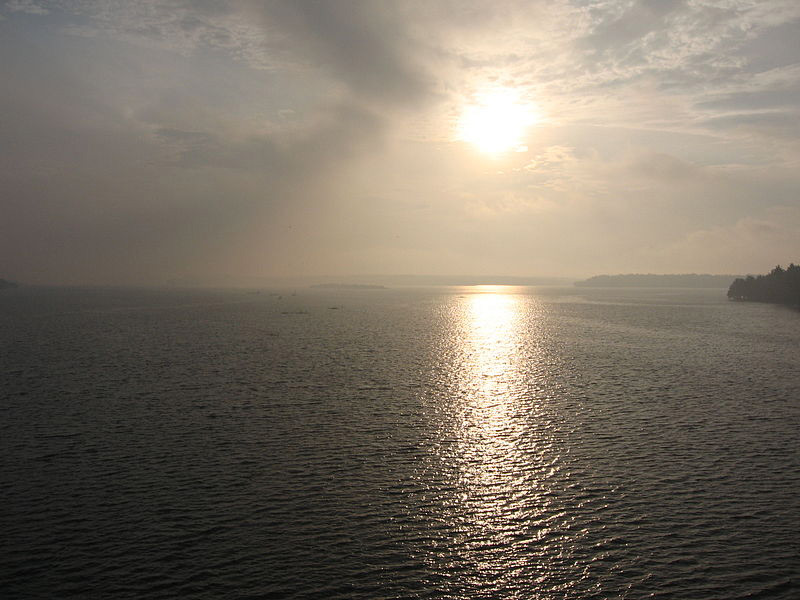 Ashtamudi Lake also called as the Ashtamudi Kayal is a large and deep wetland ecosystem in our state. This lake is in the Kollam district of Kerala. It has the shape of a palm and is large next to the Vembanad lake. The word meaning of Ashtamudi is “eight coned “, ashta meaning ‘eight’ and mudi meaning ‘cone’. It has got its name due to the topography of the lake which has several branches. This lake is considered to be the gateway to the backwaters in Kerala.

The banks of the lake are covered with large coconut and palm trees. There are boat cruises from Kollam to Alappuzha which provides transport facilities to the people in those areas. The boats are of different types and have various facilities.

The boat trip takes around 8 hours which enable one to enjoy the beautiful scenary around the backwaters of Ashtamudi lake. On the way one can also see the fisherman using Chinese fishing nets. The people around this area are mainly engaged in jobs like cashew trading, fishing, marine products industry, coconut husk retting etc. The Ashtamudi kayal and the life around it has been always an interesting topic for the poets and writers. There are some popular film songs about this lake.

The importance of Ashtamudi kayal dates back during the times of the Romans and Phoenicians. In the 14th century, it was considered as one of the important port among the five ports used for Chinese trades.

The main river that discharges in to the Ashtamudi lake is the Kallada river that originates from the Kulathupuzha hills near Ponmudi. It is a confluence of three rivers namely Kulathupuzha, Chenthurnipuzha and Kalthuruthipuzha. The Kallada river merges with the Ashtamudi kayal at Neendakara in Kollam. It has a maximum depth of 21 ft and is considered to be the deepest estuary of Kerala.

This is also a small village and is significant because the composer of the first epic poetry in Malayalam named Azhakath Padmanabha Kurup hails from this village. There is also a temple which is 1000 years old and a church around 200 years old located here.

The city very close to Ashtamudi kayal is the Kollam city which is the entry city to the lake. There is boat facilities provided if one needs to go from Alappuzha. One of the main activities in this lake is tourism.

Boating is an important activity which gives a thrilling experience to the travelers. There is the Kollam– Alappuzha water route through this lake. When one cruises through the Ashtamudi kayal they can enjoy the scenic beauty of the palms and coconut trees. There are several species of animals, birds and butterflies here. Besides many migratory birds also visit here annually.

Sasthamkotta Lake, the largest fresh water lake in Kerala, is beautified by green valleys and…

Alumkadavu is where the first houseboats in India were built. Located north of Kollam district,…

Sardar Vallabhai Patel Police Museum is in Kollam district. This police museum is the only…